Derek Man, a 29-year-old UK citizen, re-visited Hong Kong to look at the housing market, commissioned by Open Eye Gallery for LOOK17. We caught up with Derek on the opening of the festival to talk about the rapid growth of global cities and the accommodation crisis in China.

The idea for the exhibition was to have someone who is originally from Hong Kong, but who has lived abroad for long enough, going back with a kind of refreshed perspective, sort of like strangely familiar.

I’ve lived in the UK for 12 years, every time I go back I am struck by how quickly the cityscape is changing and new buildings have popped up all in a matter or two or three years. I just thought if that’s the commercial side – where do people live? I started researching and realized that there is a shortage of affordable housing – its something that I’ve always known, everyone is aware of it, but its quite abstract – its just something that happens to some people, the tiny flats are just a thing, they don’t know where or how. In a way it feels like they are, literally and metaphorically in a box – but there’s no context around it. I wanted to place the situation back into the context of this crazy world of new builds and multi million pound flats and estate agents – everything that is happening around it. This all happens under the same roof – from the same city. Most of the scenes I photographed were in Kowloon, a couple of streets down from each other. 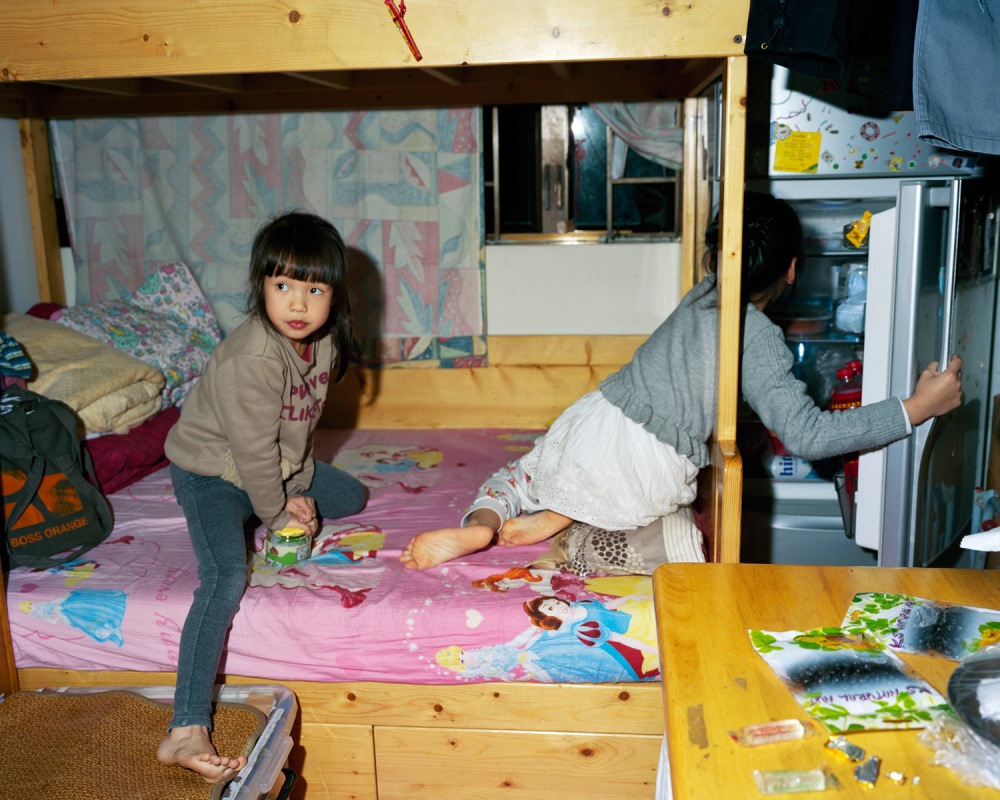 This picture of two girls – that’s actually pretty much their whole flat and to my right would be the kitchen – slash – bathroom. Its not uncommon for a flat to have a toilet a few feet away from where you’re preparing food. It’s a family of four who live in that flat and share that bunk bed, so the girls have the top bed and the parents sleep on the lower bunk. But during the summer when it gets too hot – the mum will have to sleep on the floor in front of the bed. That little bit of space there, in front of the bed, actually functions as their dining space, where they do their homework, their play area, basically the whole living room is in that few square foot.

That is not uncommon – I had some help from a local organisation who work with families such as this. I’m not looking for the most sensationalist, or the most extreme – I said just give me what is the norm – this is not uncommon. 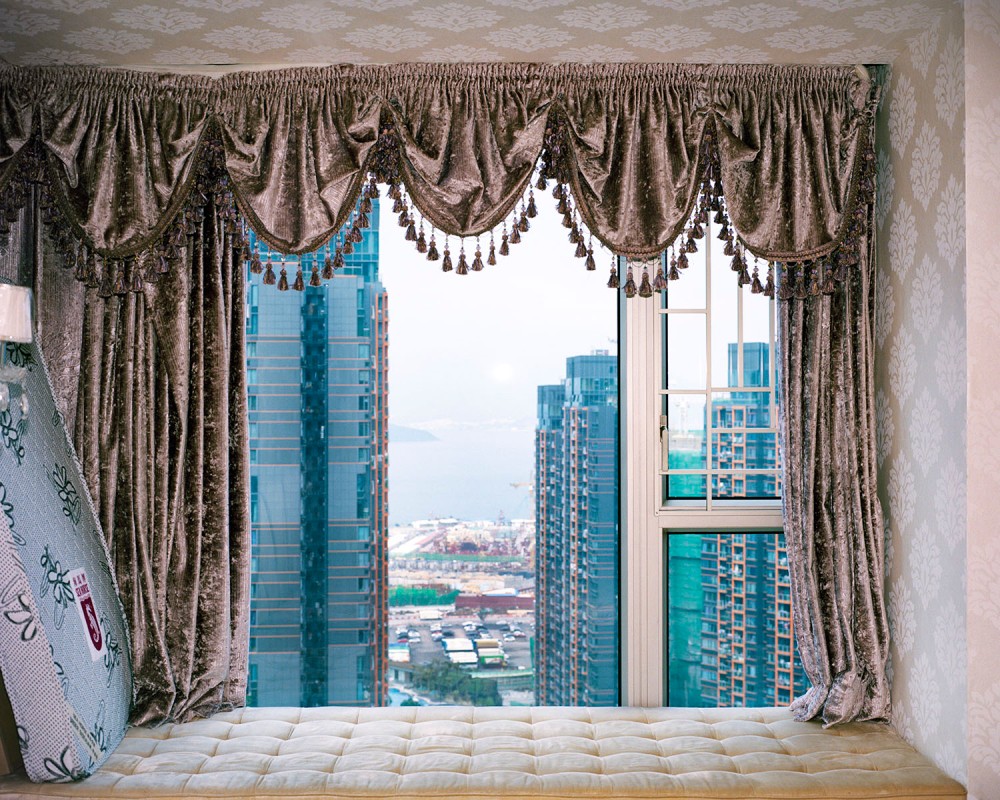 This is near where I grew up in Hong Kong, in the new territories where its at the end of the line, a place called Wu Kai Sha – you know just like in every major city, the house prices near the railway network…as soon as they build a new one it sky rockets. That was on top of the station of Ma On Shan Line. I was actually looking for the sea, because from first hand experience, my own bedroom – it’s a long time ago, we moved to that flat when I was still a kid and we had a sea view. And over the years things kept popping up between us and the sea. Now, when I look out, outside the window, its hundreds of other people’s windows. I just wanted to find more examples of that – what’s the view out there? This is a million pound flat. Out of the window you can see the three black and orange buildings, quite strange looking, even by Hong Kong standards. (Apparently designed by the same guy who designed the Pompidou). Those popped up two or three years ago, so whoever sells this flat – when they bought it they were promised a full sea view, and now, well, there’s still a gap in the middle, but there’s a construction site, so perhaps in fact in two or three years it will be fully filled up, so its not quite there yet, but its getting there. And the drapes – I like the contrast between the drapes and the futuristic looking buildings – its like this empty flat is looking to the inevitable future. 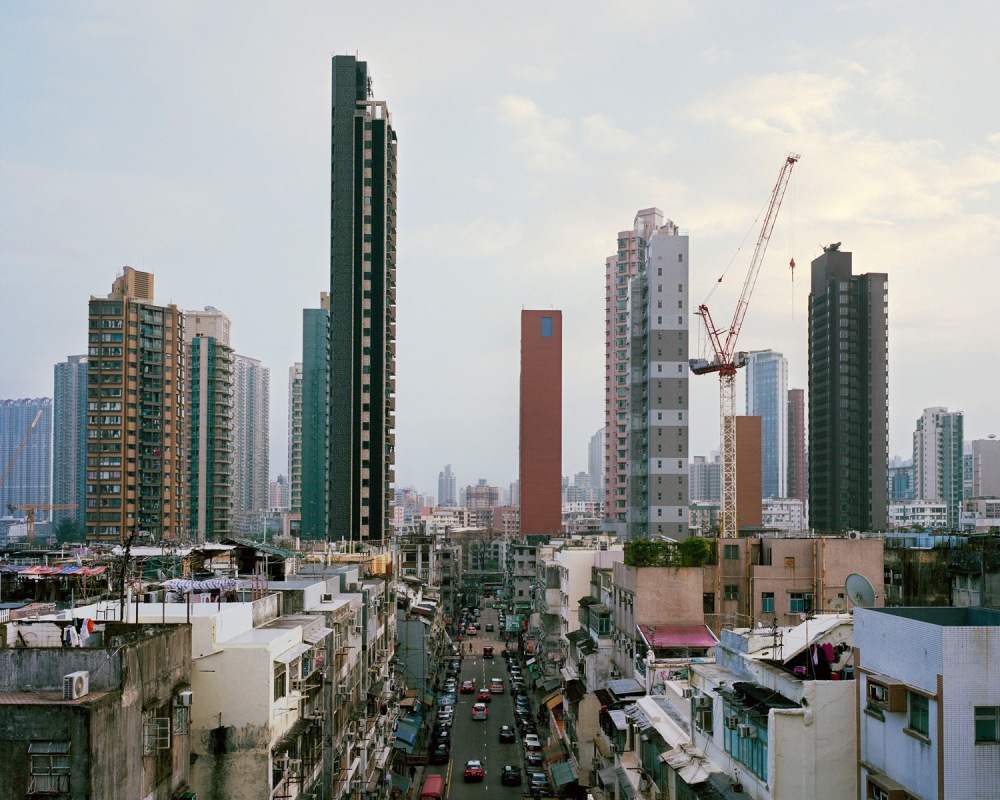 This is the landscape in Kowloon City – this is actually the area I went to school and spent 12 years of my life, so that’s near the old Kaitak airport, so low rise buildings – they moved the airport to its current site now back in 97 so since then they lifted the height limit for buildings, so people can build. But because it wasn’t being developed as a whole area, it was – once one building came down, a new one would go up, because they just have this area, they build a whole apartment building that fits exactly that shape. And over the years it turns into all these tall and skinny buildings and makes for quite a peculiar skyline. And that is something that, because of my own memories of the place and my own experience – it probably was happening then, but it was this going back, with this new idea that it becomes very apparent – its weird, that fits the narrative of what I’m trying to convey.

Born in Hong Kong but living in the UK for the past 12 years, Derek Man’s work explores cultural identity and what we call home. He often looks at how we form a sense of place, and find our own ways of feeling like we belong.

Between the human need for shelter and the commercial need for growth, Derek’s photos look at the lives of the people caught in this tension: from the families living in cramped conditions to the estate agents desperate to sell off land. In this cityscape and others like it, the struggle of finding stable homes for everyone grows increasingly more urgent every day.